Iowans for Alternative to

IFAST Board of Directors

IFAST (Iowans For Alternatives to Smoking & Tobacco) was formed in 2014 to educate lawmakers and the public on the facts about vaping and the impact that certain proposals would have on public health in Iowa.

What Do We Do?

We educate federal, state and local elected officials, other interested organizations and media outlets to ensure that vapor products are not subject to unnecessary or counterproductive laws or regulations. We work with other organizations to ensure they understand the most current proposals, policies, and legislation that could deny access to vapor products to our customers.

·A lobbyist representing your interests at the State Capitol to protect the vapor industry in Iowa.

·Action Calls to keep you up-to-date on regulations and laws at the state level that may impact the vaping industry.

·Talking points, position papers and draft opinion pieces so that you are able to inform your local elected officials and public of the issues facing the vapor industry.

·Information on how your elected officials voted on vapor issues.

·Professional public affairs assistance to combat false media stories and re-frame the discussion on the vapor industry in Iowa.

·Updates on developments in Washington, D.C. and other state capitols.

What Have We Accomplished?

·Statewide registration of vendors with a prohibition on sales to minors passed.

·Vape products taxed at the sales tax rate, and not at the tobacco tax rate, passed.

·Legalization of the sale of vapor products via the Internet passed.

·Preemption of cities’ and counties’ ability to regulate the sale or marketing of consumer merchandise (like vapor products) passed.

·A bill to increase the legal age for smoking and vaping from 18 to 21 did NOT pass.

·A bill to include vaping in the Clean Air Act did NOT pass.

·A bill to impose the tobacco tax on vapor products did NOT pass. 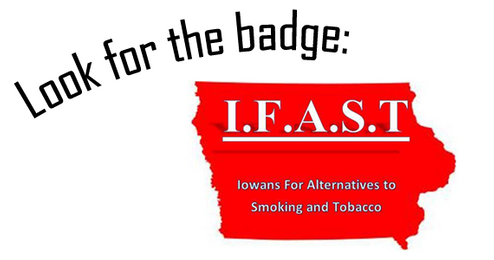 Make sure you support shops fighting for our

“I love being able to test at different vaping stations with my IFAST Club Card knowing I'm supporting a great cause.”

Send us an email

Iowans for Alternative to Smoking & Tobacco